Our SpaceFlight Heritage: Hail Columbia – Personal reflections on the loss of STS-107 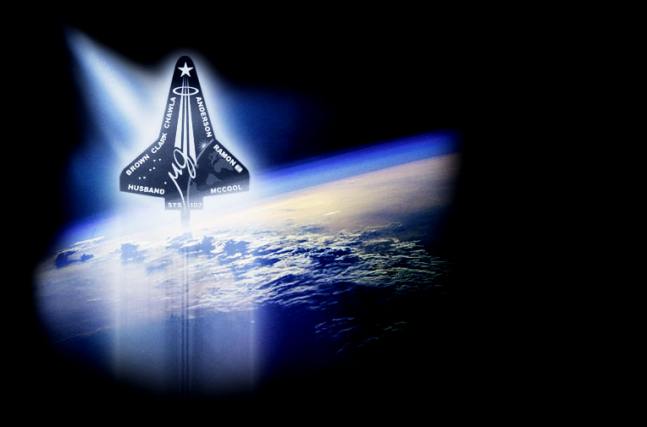 CAPE CANAVERAL, Fla — From time-to-time I am asked why I left a good-paying (if not safe) job and entered college at the ripe old age of 30 – and in so doing embarked on a path toward a very uncertain future. The simple answer is because of Columbia, STS-107. Space has always inspired me, however, as I have never been particularly good at math? I never tried to enter the aerospace industry. The crew of STS-107, Commander Rick Husband, Pilot Willie McCool and Mission Specialists Michael Anderson, Kalpana Chawla, Laurel Clark David Brown and Ilan Ramon, lost their lives on Feb. 1, 2003 with the mission itself launching on Jan. 16, 2003. A look back now on that tragic day, also reveals something else – hope.

To be fair, I paid little attention to the launch itself. I was a corrections officer for the Hillsborough County Sheriff’s Office at the time and had other matters on my mind. Space, just seemed to be something to marvel at from a distance. On Feb. 1, 2003 the seven space flyers and the oldest shuttle orbiter in NASA’s fleet, Columbia, were just 16 minutes away from touching down at the Shuttle Landing Facility located at NASA’s Kennedy Space Center in Florida. They would never make it.

Reports began to come in of explosions, of “booms” and signs of contrail arcs across the skies of Texas. For me? I only needed to hear the word “contingency” – before my eyes began to fill with tears. It took a little longer for the real depth of the tragedy to sink in with the mainstream media.

Despite the fact that it had been in service for about 23 years at that point in its history, it appeared that the media’s understanding of how the shuttles worked – was somewhat lacking. One reporter asked if Columbia could have landed at another airport. As an outsider, the lack of understanding displayed by some in the media was revealing. According to CNN, Columbia was traveling at nearly 17 times the speed of light when she broke up.

Humanity has yet to break the speed of light. Columbia was traveling at 17 times the speed of sound when she was lost. Misinformation and conspiracy theories were abundant.

The loss of Columbia forced me to take a hard look at what I was doing with my life.

The first thing that the media should have done was let the public know that terrorists did not blow the shuttle up, nor was megalightning a contributing factor.

I labored on at the Sheriff’s Office an additional two years before completing my Associates Degree from Brevard Community College (virtual campus). Then came the moment of truth. A person with a two-year degree gets a boost in pay from the SO – instead of trying to collect – I tendered my resignation. A few months later I was attending the University of South Florida pursuing a degree in public relations.

Less than a year later and I was working through my first internship with NASA at the Kennedy Space Center Press Site. While it was a rewarding experience, public relations, the field I had entered college pursuing – was not something I was suited for. I tend to say what is on my mind. Upon completing my internship I returned to college and asked what other fields I might be suited for. One rose quickly to the top – journalism. Stunning the counselor I spoke to, I informed her that I wasn’t a quitter, that I would complete the courses required for PR and also finish the additional courses to obtain a degree in journalism as well. At this time, I was unsure I had much of a future in space. I was volunteering, freely donating my time, energy and resources through the Florida Public Relations Association at the NASA press site. It continued to provide me with access to KSC and allowed me to better understand how space journalism operated. I worked with a lot of the outlets that cover the events at this time as well. Aviation Week & Space Technology, Space.com, Universe Today, Spacevidcast and some other tiny blogs.

So what is the message here and what does my personal experiences have to do with the loss of Columbia?

When speaking to a long-time PR practitioner she surprised me when she said her husband once worked in space but his experiences in the field had caused him to give up. It was a story I would see time and again. I have lost count of the times when I just wanted to throw in the towel, where negative events or people caused me to doubt. In the end though, I realize that, no matter how bad things get, it is a cakewalk compared to what others have encountered. There will always be any number of reasons to “give up” on something. However, just because you encounter events that make you want to stop or people who are trying to prevent you from accomplishing something – doesn’t mean you should.

Each of the seven person crew encountered any number of obstacles. I imagine David Brown, with his wealth of experiences, the sheer diversity of skills that he possessed and all that he accomplished, or “KC” as Kalpana Chawla was known, with the restrictions of her heritage or the fact Ilan Ramon, due to his parent’s life – might not have been born, become a fighter pilot let alone Israel’s first astronaut and I think. As should we all. Are the challenges that we face in life really that daunting? Are the obstacles and obstructionists – really that overpowering?

Eileen Collins stated something to the effect that the crew of STS-107 was encouraging NASA to get back into the business of spaceflight (during the lead up to her “Return to Flight” mission STS-114 in 2005). When we encounter hard times, moments when support for space exploration just does not seem to be there, perhaps we should look at the difficulties that they and those who make this amazing enterprise possible have encountered, take heart, and carry on.

Yes, it’s hard. But is it really any more difficult than what some of these folks encountered during their lives? The Columbia Accident Investigation Board (CAIB) and an nearly-uncountable number of folks have relayed to the world what went wrong on that tragic day. I think it might be best if we all took stock, reflected on the loss and use it as the propellant to move forward. The crew of STS-107 were amazing individuals who touched the lives of people around the globe. Some of those people? They had never met – but who continue to be inspired more than a decade after they were lost.

Hail Rick, Willie, Ilan, KC, Laurel, David and Mike. Hail Columbia – and for the inspiration that you provided – thank you.

Beautiful article. I love the story.