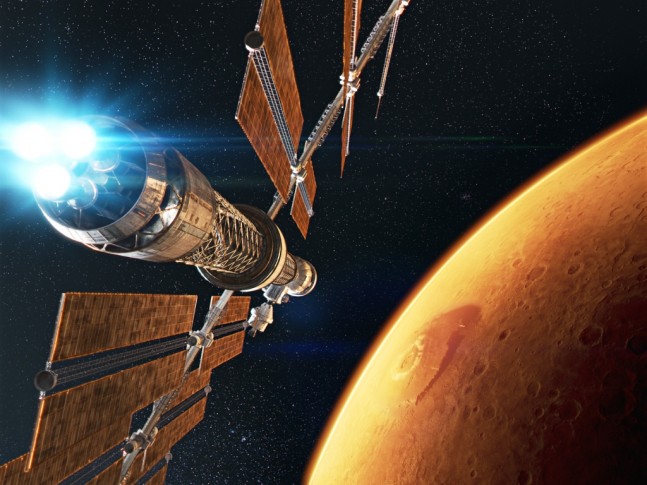 KENNEDY SPACE CENTER, Fla — Sometimes we forget. That simple statement played out again and again in my mind as I watched – Journey To Space. This new documentary details the close of the shuttle era, the interim period that we currently find ourselves in as well as the possible future we might have in store for us. Lasting about an hour, the movie, narrated by Patrick Stewart of “Star Trek” fame, details NASA’s efforts to enable humanity’s drive outward into the Solar System. The core element of the documentary’s second half – is the push to have humans visit the planet Mars. Image Credit: K2 Films / Giant Screen Films

A special advanced screening of the new documentary, Journey To Space, was held at the Kennedy Space Center Visitor Complex on March 18. The film is starting to appear in theaters across the globe and will be open to guests at the Visitor Complex later this week. The viewing included a reception before the screening, which was attended by the last commander of the final shuttle mission to orbit as well as the director of the documentary – Chris Ferguson and Mark Krenzien (respectively).

The viewing was sponsored by an array of aerospace firms that included: Boeing, Jacobs, Lockheed Martin, and Orbital ATK. The film’s producers, K2 Communications and Giant Screen Films, hosted the screening at the Visitor Complex, with it showing on the IMAX screen serving to display the film in a spectacular fashion.

Krenzien, Journey To Space’s director, detailed how the film was an effort spread out among an array of experts within the space industry.

“These two companies, K2 Films in Los Angeles and Giant Screen Films in Chicago, they had both worked together before to produce and distribute these giant screen films. What happened was, when the shuttle was retired in 2011 – it generated a lot of interest in the giant screen theater market that is what we call the institutional IMAX or giant screen market,” Krenzien said during a recent interview. “A limited number of locations, the California Science Center, the National Air and Space Museum and the California Science Center have shuttles… it was thought that a film celebrating the shuttle would be a nice match for the giant-screen theaters at some of these institutions.” The move from shuttle to the Space Launch System is highlighted in Journey To Space. Image Credit: K2 Films / Giant Screen Films

Some of the public might believe that the US’ Space Program drew to a close in 2011 – with the end of the Shuttle Program. Journey To Space works to corrects this misconception, denoting that NASA is now on the path for bigger things.

“We realized pretty quickly that we didn’t want to limit the film to just a celebration of the shuttle, it became pretty clear that we wanted the shuttle to serve as a ‘jumping off point’ that this magnificent machine allowed us to create the International Space Station, what that has allowed us to learn about living in weightlessness, which is now helping us to go out into deep space,” Krenzien said. “Then, of course, the questions was, ‘how to do it?'”

Krenzien relayed that it was decided to touch on the past and then use those events to detail what is planned from the future.

“We wanted to let the public know that we do have a goal… that we are actively working on, here and now, a real-life project and equipment that will take us to deep space,” Krenzien said. Elements from NASA’s plans to send crews to Mars – were expounded upon in great detail in Journey To Space. Image Credit: K2 Films / Giant Screen Films

During the opening moments of the movie, Chris Ferguson, the commander of space shuttle Atlantis on the final shuttle mission, STS-135, is shown viewing shuttle Endeavour rolling through the streets of Los Angeles on its way to the California Science Center – something that did not happen in real life.

“Ferguson’s appearance was meant to represent the astronauts who were there – and who had flown on the orbiters during the program’s historic 30 years of service,” Krenzien stated.

The film opened to the public on Friday, March 20, at the Visitor Complex. The documentary will now play on IMAX, Giant Screen and other theaters in 2D and 3D formats throughout the United States and worldwide (mainly at museums, science centers and similar venues) in the near future. SpaceFlight Insider attended the premier at the Visitor Complex and give it our highest approval rating.

“My involvement with this project began shortly after I started with Boeing back in early 2012, so, it sort of transcended my Boeing career and they were looking for somebody to help ease the transition from shuttle flight into whatever is coming next… So, they said, hey, we know this and I think he charges a little less per word than Patrick Stewart does, so why don’t we get help with narration,” Ferguson said before the film’s premier. Ferguson now serves as Boeing’s deputy program manager for the company’s CST-100 commercial spacecraft. “It was an honor to take part in it and it was really an enjoyable experience!”

The views expressed in this review are solely those of the author and do not, necessarily, reflect those of SpaceFlight Insider

I find the use of the Early Phase orion service Module and the 105 Metric ton concept ( Which hasn’t even been approved atm. ) in the movie more than a little misleading. As a Tour Guide/Educator on the Space Programs and coming programs and technologies. I find it down right lazy that they did not fix this prior to the release. Which they had ample time. 2 years we have seen the new version of the Orion Service Module based off the ESA ATV 4 Albert Eistein Automated Transfer Vehicle. Other than that it was a good movie with good infor.