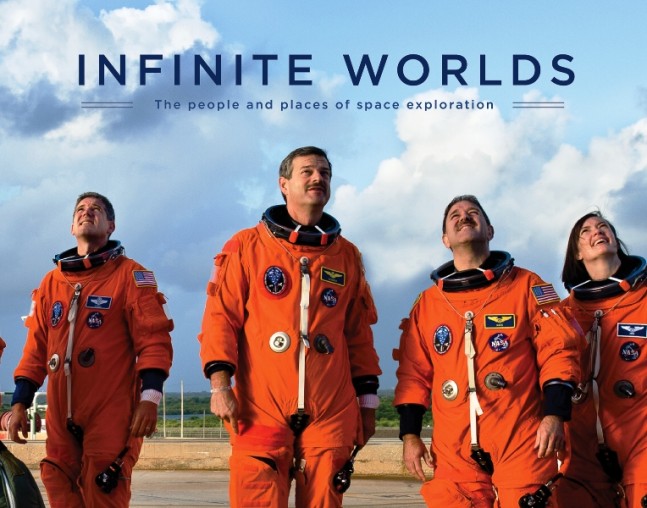 KENNEDY SPACE CENTER, Fla — Many books that detail the people and machines that make spaceflight, especially those dealing predominantly with photography, detail events – in very broad strokes. On some occasions, however, the focus becomes far narrower – such is the case with, Infinite Worlds: The People and Places of Space Exploration, a book highlighting the imagery taken by Michael Soluri and chronicling the May 2009 flight of space shuttle Atlantis on mission STS-125 – the last flight to service the Hubble Space Telescope.

Soluri starts us out far back in time, showing how our ancestors marveled and denoted the celestial events that our race has seen since we first looked skyward. He then walks us in to the weeks and days leading up to this historic flight, covering the intense preparation required to send spacewalking repairman on a mission to upgrade one of NASA’s Great Observatories. Wanting to gain a better understanding behind the thought process behind this book, SpaceFlight Insider sat down with Soluri at the Kennedy Space Center Visitor Complex – he provided us with insights as to what was behind the look and feel of the book. Soluri, a consummate professional, detailed this, all the while providing unique insights into what is required to capture a moment in time – and how to share it in a manner that most anyone can fathom, retain and appreciate.

To adequately cover the various aspects of the final shuttle flight to Hubble, Soluri had to travel to an array of NASA centers in Florida, Texas and Maryland. Soluri’s initial effort focuses on time, distance – and light. Numbers often bounce off readers, therefore Soluri uses key artifacts and moments in human history – highlighting how long it actually takes this ancient light to reach our eyes – as well as the eyes of our robotic, orbiting observers.

Just how ancient these elements are – can be seen  in the opening pages of Infinite Worlds.

“The prologue, as a means to introducing the narrative came about from first trying to position the book. My agent tried to put this out there about 2010 – and the market really wasn’t ready,” Soluri said. “We got like 14 rejections, people really didn’t quite make sense of what we were trying to do because they had never seen it before.”

It was at this point that the author realized he was sailing through uncharted waters. Wanting to provide them with a ‘window’ – to see what Soluri had in mind – he broke the elements down and linked them to historical references.

“So I told my agent to let me think this through. Then came Herzog’s Cave of Forgotten Dreams, and then I realized that, hunh, the first image from Hubble after it had been refurbished – was of a globular cluster named Omega Centauri…and that it took 15 thousand light years for that light to arrive here and what we’re seeing is the light that came from back then. Meaning that the light had originated at a time when early humans were drawing and painting on the cave walls of Lascaux – and other, similar cave units.” “So I thought that’s an interesting perspective and I can visualize that, I can see the handprints and see the light and, eventually, I began playing with this concept, I said; ‘How far back can I go?’ Hubble Deep Field, Gamma Ray Burst, things like this…”

Although Infinite Worlds focuses in on STS-125, Soluri is no rookie when it comes to covering space exploration efforts. The photographer has followed the various paths to orbit – for more than 15 years. From within the pages of Infinite Worlds, this experience, along with his passion for the subject matter – is obvious. Soluri excels at displaying the subject matter, the materials and tools needed to make the dream of space travel a reality, in a manner that few others have done previously. His experience and skill has attracted premier institutions who are more than happy to show off his work.

“I have work focusing around the EVA tools that I photographed, which started looking at the tools as art, sculpture that are on exhibit at the Intrepid (Intrepid Sea, Air and Space Museum) up in New York on a show called, ‘Hubble@25,'” Soluri said.

Throughout the course of the interview one fact was made clear, the author loves space. More importantly, he is incredibly well-versed in terms relating to spaceflight. With the first flight of NASA’s new crew-rated spacecraft just around the corner, Soluri got a twinkle in his eye when asked if he would get involved in this next chapter of crewed space exploration, the veteran photographer stated that his schedule is already pretty full.

“At present I have an exhibition at the Kennedy Space Center Visitor Complex, Atlantis, it has now been up for little more than a year, that focuses on the labor force here at Kennedy Space Center, Soluri said with a smile. “Then I have some photographs that will be coming out at the Smithsonian Air & Space Museum in January – it’s the 50th anniversary of the EVA (extra-vehicular activity) with White.” While the anniversary of Ed White’s steps outside of the Gemini 4 might provide a great opportunity to detail humanity’s journey into the black – Soluri is working on a project that has its feet firmly planted in deep space.

“In terms of photography what you can look forward to after Hubble – will be my on going work with New Horizons team, so it’s a big year come July, I’ve been with that group since the Spring of 2005. I will be right with them in Mission Control and, you know, for better or for worse I have been the guy who is photographing them. I have a trusting relationship with Alan Stern and the mission folks that’s going to be very, very exciting.”

Retailing for $40, Infinite Worlds: The People and Places of Space Exploration is published by Simon & Schuster and has more than 300 images along with 15 essays from an array of individuals including the people who made the space shuttle program work. The book also has a forward penned by former Senator John Glenn opens the book. Glenn was the first American in orbit and he returned to space aboard shuttle Discovery on mission STS-95. Michael Soluri is based out of New York and has been involved with relaying the historical importance and excitement of space exploration through his work for some time. His work covers the width and breadth of spaceflight, from human exploration, to that of the robots and probes making discoveries regarding our solar system – to the cosmos beyond – Soluri’s work touches on virtually all aspects of the final frontier.

His work has been printed by Time, Wired, National Geographic, Vanity Fair, the BBC, NPR, Popular Science, Space.com and numerous other outlets.

It’s at the top of my Christmas gift “wish list”. 🙂