Photo Feature: EFT-1 – The band gets back together 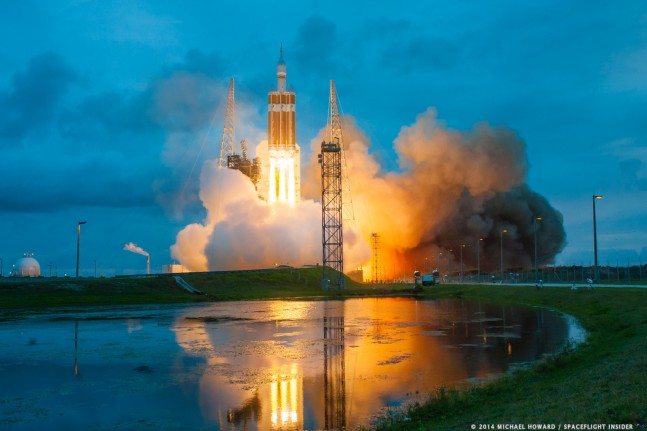 KENNEDY SPACE CENTER, Fla — It was likely the most important launch of the year and it marked the culmination of what the SpaceFlight Insider (SFI) team had been planning – since forming a year earlier. We realized even then – that we might be biting off more than we could chew – and that when all was said in done – we would fail. There has been a lot of trial and error at SFI since our official Dec. 15 start date – but when all was said and done? Like NASA, we worked the problem – and accomplished something special. EFT-1 – would be the first time that SFI would host a live webcast. It had been something that we had been working on – for months. Affinity Productions provided the streaming services, Nathan Moeller with Astro95 Media had produced the graphics, Sawyer Rosenstein with Talking Space developed and produced the prepackaged elements which would run during the show.

It was a lot of little pieces that had to come together – and, in the end, it all did.

We made sure to dot all of our “Is” and cross all of our “Ts”” – but there were two elements, that we simply could not prepare for – the lack of internet coverage at Kennedy Space Center – and the intense interest in EFT-1.

The launch of EFT-1 – was the first flight of Orion, the first time that a United Launch Alliance (ULA ) Delta IV had been tapped to carry out a flight that was not flown for the Department of Defense. There would be other unusual events for the flight of Orion.

Under normal conditions, any members of the media who wanted to attend the various events out at KSC – are welcome to do so. This time? There were just too many press in attendance. NASA or ULA therefore had decided to restrict the amount of press that could come out. Given the number of events that were taking place at any one given point in time? This probably was not a bad decision.

SFI had to scramble to ensure that we had trained staff to attend these events, that individuals who have not had the opportunity to attend them – would be given a chance to do so. Many staff members scratched their names off of the various lists to accomplish these objectives. They worked to ensure that all of the spots that were open – had someone there – even if it meant that they, themselves, might not get the spot they had hoped. The team came together and showed its skills – and its professionalism. The first launch attempt, on Dec. 4, just was not in the offing. Winds in the wrong direction, wayward boats and a sticky hydrogen valve – all played their part to ensure that the launch was scrubbed for the day. The following day’s weather – did not look promising. Rain, continued to come down in a slow drizzle at Space Launch Complex 37 raising concerns that the launch would be scrubbed. SFI’s photographer’s fretted that they would end up with tons of images – dotted with haze and rain droplets. Meanwhile, back at the press site, the folks at Affinity Productions had regrouped and come up with a new plan. We gave up using the services out at KSC – and would try running off our own MiFi. Problem (mostly) solved. Until just about 3 minutes before launch – we ran without a major hitch. Only when the other outlets and personnel out at KSC picked up the pace of their posts – did we “break the internet.”

As we began to wrap up and tear down the tent and various support structures SFI photographers began to trickle back from the NASA Causeway, from atop the Vehicle Assembly Building, and other sites. The images they took – were nothing short of amazing. The best was yet to come as they had not collected the cameras placed at SLC-37.

Remote cameras were collected and of the twelve or so that were set up – ten had operated flawlessly. The photographers began processing the images and some of them are included in this feature. Just as NASA had described the flight of Orion, the photos that the highly-skilled team had acquired were, “perfect.”

It has been a long road this past year, SpaceFlight Insider has tried to do many things that larger outlets don’t try to do for a few years after they initially are formed. It has not been easy – but, as of EFT-1, we are now capable of doing almost everything that we set out to do. One recurring phrase that was repeatedly used during the lead up to launch was, “The band has gotten back together.” SpaceFlight Insider, is made up almost entirely of volunteers. While NASA celebrated having disparate elements coming back to work as one – we were celebrating having a similar achievement – an organization that had come of age – and was starting to achieve great things.

I use our photo features to relay the first-hand experiences of myself and other team members at the scene to you, our readers. I would like to close with my heart-felt thanks to: Michael Howard, Michael Deep, Jared Haworth, Amy Thompson, Sean Costello, Bill Christie, Robert Springer, Michael Seeley, Sawyer Rosenstein, Abigail Harrison, Nicole Harrison, Rae Botsford, James Tutten and Scott Johnson. NASA’s first flight of the crew-rated Orion spacecraft has generated a lot of excitement within the public. Photo Credit: Chris Cook / www.cookphoto.com Congratulations on your one year anniversary.