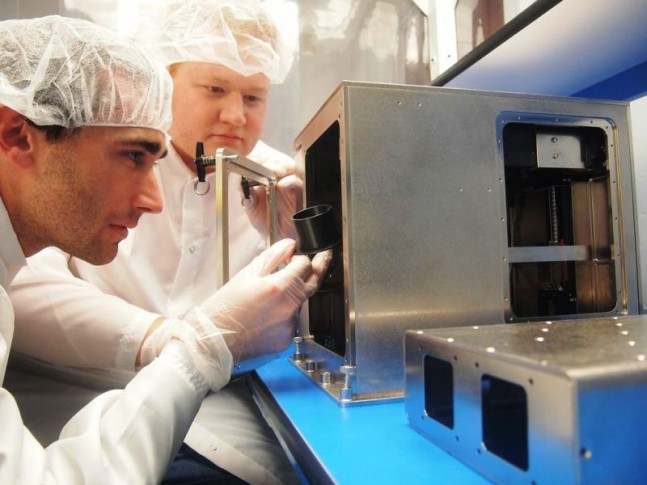 Made in Space CTO Jason Dunn (left) and P.I. of the 3DP Experiment Mike Snyder look to optimize the first 3D printer for space. Photo Credit: Made in Space

On Sept. 23, 2014, the Dragon CRS-4 resupply spacecraft launched by Space Exploration Technologies (SpaceX) docked with the International Space Station (ISS), delivering a cache of supplies including spare parts, clothes, food, and of course science experiments – numbering among them the first 3D printer in space. Manufactured by Made in Space, a small startup company out of Singularity University, the 3D printer will be used by NASA for its 3D Printing In Zero–G Technology Demonstration (3D Print), in cooperation with the Center for the Advancement of Science in Space (CASIS) which manages the National Laboratory aboard the ISS.

In 2011, an earlier version of the printer was tested in NASA’s Reduced Gravity Aircraft, or “vomit comet”, to prove that it could function in a microgravity environment – an important step, since it was specifically designed to function in zero-gravity. Brad Kohlenberg, Made in Space’s business development engineer, explained why to NBC News.

“Believe it or not, the actual extruding of the plastic onto itself does work in zero-G, but you could have a problem with the belts and gears that are used to control the positioning of the apparatus. You want to make sure those don’t float in zero-g,” said Jason Dunn, CTO and co-founder of Made in Space, to Tony Darcell of the Youtube channel Hubble Hangouts.

Dunn went on to explain that the company originally hoped to send a normal commercial 3D printer to the ISS so that anyone could send their schematics in an e-mail into space and have it printed: Jason Dunn, CTO and co-founder of Made in Space. Photo Credit: Made In Space

“Getting a 3D printer there quick was our goal, we took these commercial printers on the zero-g flights and we tested over a dozen different printers and then built some new printers of our own, but through that entire process, we did over three hours of zero-gravity time. We found that none of the commercial printers would work. We had to modify them significantly to get thermal settings right, to get the mechanical settings right, all the things you would imagine. But then on top of that, just to build a printer that could survive launch to the Space Station, to meet all the safety requirements to work on the Space Station. The outgassing can be harmful to the crew, and the EMI, and the things like that.

“We actually had to go down the road of developing an entirely new type of printer. One that’s much more rugged and reliable, that’s extremely safe and is really easy to use. In fact, there’s only one button on the entire printer, and that’s the ‘on’ switch. Everything else is controlled at our ground station here in Mountainview, Calif., so we actually operate the printer from the ground.”

3D printing opens a potentially groundbreaking new era in space exploration. With enough time and proper testing, we could one day see resupply runs to the ISS – with materials for 3D printing – rather than spare parts.

“Up until this point in time, there’s only been one way to get hardware into space, and that’s been launching it on rockets,” Dunn said. “And now, today, with the 3D printer on the Space Station, there’s actually an entirely new way to get hardware there. We in fact just e-mail the digital file to our 3D printer and print it out. So we think that’s a paradigm shift.”

Of course, a 3D printer can’t print something from nothing. It needs raw materials in order to print anything. It’s hard to see exactly what the advantage is of having a 3D printer when the same amount of mass will have to be transported regardless. However, according to Dunn, that’s not as much of an issue as you might think.

“Even if you have to send the raw material, it’s still beneficial, because when you don’t have to design your hardware to survive launch, when you remove the requirement of it having to withstand several times the force of gravity and all these vibrational loads, you can actually redesign your space structures to be extremely delicate. So imagine something that only has to work in zero-gravity, but doesn’t even have to support its own weight. So just by sending the raw material in its most condensed form, we can actually let that material go a much longer way by building what we call zero-gravity structures.”

But Dunn is quick to point out that even shipping condensed raw materials that will last longer still relies on Earth. The company’s vision is In-Situ Resource Utilization (ISRU) so that the ISS and eventually colonies on Mars can live off the land.

“What we started to look at the past couple years is, how can we actually produce feedstock for the 3D printer on the Space Station? And we started developing a new piece of technology that we call Redo. And ‘Redo’ from the fact that you can take a 3D-printed part and redo it, turn it right back into the feedstock.” Dunn also mentioned a surprising fact about life on the ISS. But the advantages of 3D printing don’t end with the International Space Station. The European Space Agency (ESA) has already explored the possibility of 3D printing in the construction of a lunar base.

Astronaut Reid Wiseman expressed his enthusiasm for the 3D printer before he began his stint aboard the Station.

“Imagine if you’re going to Mars, and instead of packing along 20,000 spare parts, you pack along a few kilograms of ‘ink’. Now you don’t even need to know what part is going to break. You can just print out that part,” Wiseman said.

Small 3D printers could print up parts for larger ones. Someday there might be huge 3D printers in orbit constructing spacecraft for deep-space missions. Asteroids could provide the raw material needed or minerals mined from the Moon. The possibilities are endless.

Robert Hoyt, CEO of Tethers Unlimited said, “We’d like someday to be able to have a spacecraft create itself entirely from scratch, but realistically that’s quite a ways out. That’s still science fiction.”

There are problems. The most fundamental of which is that structures built for use in space must be precise, but so far all 3D-printed material has been rough. A rough surface is easier to crack or to become suffused with dust, grime, or mold.

According to ESA, “Traditionally, materials used in space have to be as smoothly finished as possible, with no loose particles or pores that might develop cracks. They have to be clean, to surgical standards. Delicate satellite electronics or optics have in the past been fatally damaged by particle contamination or outgassing.”

The European Space Agency, like any professional aerospace organization, acknowledges the fact that the technology still has a way to go in terms of working out issues such as outgassing. “We had to address that problem in several different ways,” Dunn said. “The fact is, we can’t have a printer that is breaking off little pieces of plastic and letting it float around. The moment the astronaut opens the door of the printer and those pieces start floating out, they get stuck in all the little nooks and crannies of the Space Station. We’ve built a really sophisticated type of environmental control. It’s something that can recycle the harmful gas that’s being created – off-gassing of things like styrene that come out of a print – but it also captures the particulates, and it controls the temperature of the print volume. So at the end of the day, the best way to get a really good print is to control that volume at the right temperature settings and things like that.”

Whatever the difficulties, it’s important to remember that 3D printing is a relatively new technology. As time goes on, its quality and precision should improve. Even if the 3D Printing In Zero–G Technology Demonstration turns out to be a disappointment, new and better models will emerge, perhaps sooner rather than later.

The views expressed in this commentary are solely those of the author and do not, necessarily, reflect those of  SpaceFlight Insider