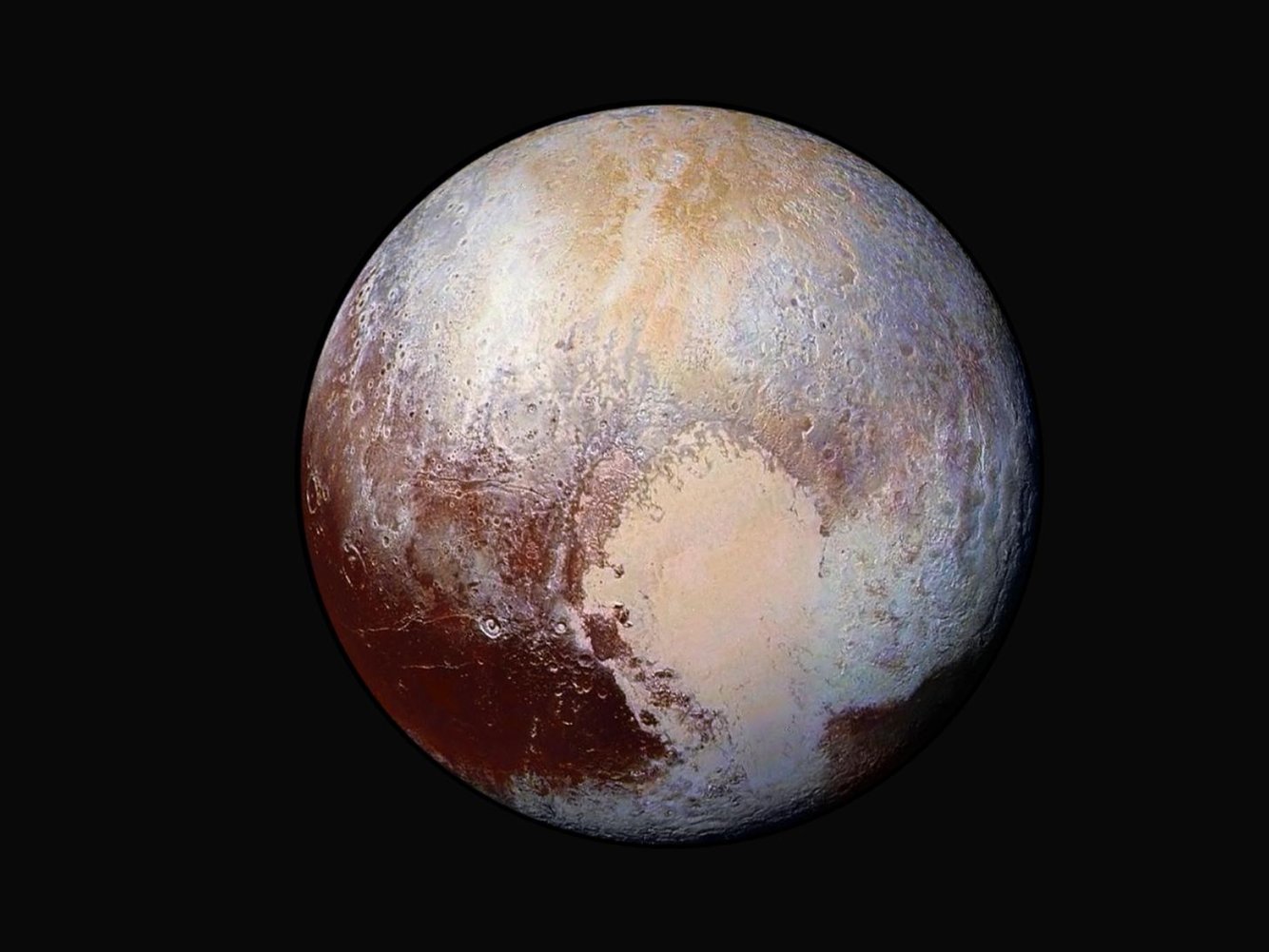 A comment by NASA Administrator Jim Bridenstine affirming he still considers Pluto to be a planet has drawn criticism from some media outlets that may be motivated more by politics than science. It is also a potential game changer in the decades-long planet debate.

On Friday, August 23, Bridenstine publicly stated his support for Pluto’s planet status while taking a tour of the University of Colorado at Boulder‘s Aerospace Engineering Sciences Building. A video of Bridenstine’s statement was posted on Twitter by Cory Rappenhagen, a meteorologist at Colorado’s 9News TV station.

“Just so you know, in my view, Pluto is a planet. You can write that the NASA Administrator declared Pluto a planet once again. I’m sticking by that; it’s the way I learned it, and I’m committed to it,” Bridenstine said.

Thirteen years ago, the International Astronomical Union (IAU) adopted a planet definition that excluded Pluto. The definition required planets orbit the Sun, be large enough to be rounded by their own gravity, and clear the neighborhood of their orbits.  Pluto does not meet the last condition because it orbits in the Kuiper Belt, a region of tiny icy bodies and was therefore labeled a dwarf planet.

The move was prompted by the recent discovery of several small objects in the Kuiper Belt, especially Eris, which is slightly smaller though more massive than Pluto.  Rather than class them all as planets, the IAU chose to place them in this separate category under the justification that the solar system cannot have too many planets because children will not be able to memorize all their names.

However, scientists who oppose the definition noted memorization is an archaic method of teaching the solar system and pointed out there is no scientific basis to the argument that the solar system cannot have too many planets.

The definition was controversial for many reasons, including the fact that it was enacted by just four percent of the IAU‘s membership, with many planetary scientists signing a petition rejecting.

Alan Stern of the University of Colorado at Boulder, principal investigator of NASA’s New Horizons mission to Pluto and longtime opponent of the IAU definition, emphasized no solar system planet fully clears its orbit of asteroids and comets. Jupiter orbits with a host of Trojan asteroids, and even Earth has asteroids in its orbital path.

Also problematic is the fact that the IAU definition gives primacy to an object’s location over its intrinsic properties. Some scientists noted that if Earth were in Pluto’s orbit, it would not clear that orbit of Kuiper Belt Objects. This means the IAU definition could result in the same object being labeled a planet in one location and not a planet in another location. It is also biased against objects in more distant orbits, which have larger orbits to “clear.”

And in spite of the discovery of numerous exoplanets orbiting stars other than the Sun, the IAU definition requires a planet to orbit the Sun rather than a star.

Ironically, the term “dwarf planet” was first coined by Stern in a 1991 paper as the proposed name for a class of small planets large enough to be rounded by their own gravity but not large enough to gravitationally dominate their orbits. In a 2000 paper, Stern and Hal Levison of the Southwest Research Institute in Boulder (SwRI) distinguished between planets that gravitationally dominate their orbits, which they called “uber planets,” and those that do not, which they called “unter planets.”

In 2015, NASA’s New Horizons spacecraft flew by Pluto and found it to be far different from the dead rock many expected. Active geologically and possibly host to a subsurface ocean, Pluto has a layered atmosphere, varied terrains, interaction between its surface and atmosphere, and cryovolcanoes. Some processes seen on Pluto have been found elsewhere in the solar system only on Earth and Mars. Yet the spacecraft’s findings did not prompt the IAU to revisit the issue.

Bridenstine’s public rejection of the IAU definition generated controversy. On Tuesday, August 27, Business Insider‘s Tom Porter  questioned Bridenstine’s qualifications for the job of NASA Administrator in an article titled, “Trump’s NASA chief, who has no scientific background, says Pluto is a planet.”

Bridenstine was criticized after his nomination for the NASA administrator position in 2018 because he is not a professional scientist and was not chosen from within NASA ranks.  Some critics painted him as a climate change denier though Bridenstine has since publicly declared his acceptance of the fact that climate change is driven by human activity.

A former Congressman from Oklahoma, Bridenstine served as a Navy pilot and and previously ran the Air and Space Museum in Tulsa, Oklahoma. He is the primary mover of NASA’s Artemis program, which aims to return humans to the Moon in 2024. In contrast to the Apollo program, Artemis is the first step toward a long-term human presence on the Moon.

“He’s just using the word the way planetary scientists use it, nothing unusual there,” Grundy said regarding Bridenstine.  “Sure, there was that controversial IAU vote back in 2006, but it’s important to realize that’s not how planetary scientists use the word, and there’s no reason for the public to use it that way, either.  Planetary scientists are interested in planets’ diverse compositions, structures, and the processes that operate on them.  Those things don’t go away or become uninteresting for a planet that’s in the wrong orbit according to the IAU definition.”

Porter’s article made no mention of the fact that Pluto’s status remains a matter of debate in the science community. A list of articles he recently wrote for Business Insider reveals he is a frequent critic of US President Donald Trump, raising the question of whether his article might be motivated more by politics than by science.

Britain’s Mirror chided Bridenstine for calling Pluto a planet 13 years after it was “declassified,” also without any acknowledgment of the ongoing debate among scientists.

Planetary scientist Phil Metzger of the University of Central Florida (UCF), who earlier this year published an article on the history of planetary taxonomy in the journal Earth and Planetary Astrophysics, commended Bridenstine for taking a stand in favor of the geophysical definition.

“I think Jim Bridenstine knows that the public’s thoughts about Pluto aren’t just sentimentality. People understand that a planet is a special thing in nature, the just-right type of place between cold lifeless asteroids and hot lifeless stars. Planets are where complex geology and possibly even life can exist. This is deeply important to science and deeply important to who we are as human beings. People look at Pluto and they see this flourishing of emergent complexity which makes planets important — more in Pluto than in any other planet besides Earth. I think Jim has tapped into the public’s instinct about this.”

While the IAU has shown no interest in revisiting the issue, the debate has continued for more than a decade. In 2017, planetary scientist Kirby Runyon of the Johns Hopkins University Applied Physics Laboratory (JHUAPL) presented the geophysical planet definition first proposed by Stern at that year’s Lunar and Planetary Sciences Conference as an alternative to the IAU definition.

At the heart of the planet debate is the question of who decides what a planet is and whose definition is deemed “official.” While much of the mainstream media has granted official status to the IAU, Stern and other scientists reject this along with the notion that science can be done by voting rather than through an organic process.

Another stellar article, Laurel. I wish all writers who take on Pluto were all as well-informed as you!