OPINION: Fund NASA or shut it down 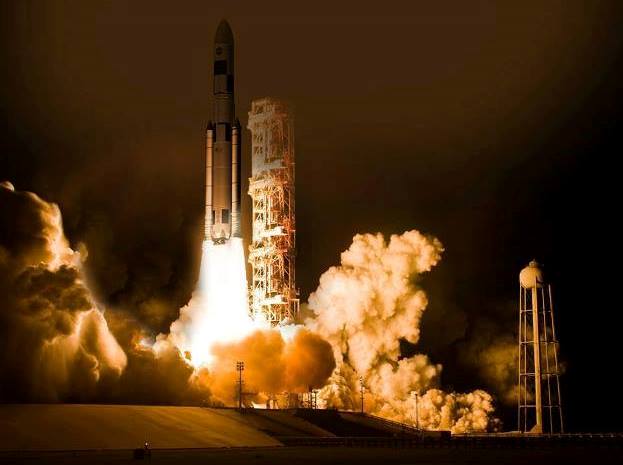 A recently-issued audit by the Government Accountability Office or “GAO” detailed how NASA lacks the funding to fly the Space Launch System (SLS ) by its scheduled launch date in December of 2017. This is only the latest delay for the successor to the space shuttle, originally ordered by President George W. Bush to fly no later than 2014. Is SLS destined to go the way of Constellation?

NASA programs are gutted and canceled on a regular basis. From a budget that consumed nearly ten percent (NASA’s budget actually peaked at about 4.1-4.5 percent of the federal budget) of the Federal budget in the 1960s, NASA’s budget woes began shortly after Apollo 11 landed on the Moon. The Apollo 18, 19 and 20 missions were canceled due to these budget cutbacks. The ambitious Apollo Applications project, which would have included the space station Skylab, a manned lunar base, and a manned Venus flyby, was canceled except for Skylab. About two decades later, in the 1990s, another NASA project, the X-33, called VentureStar, a planned successor to the shuttle, was canceled in 2001 after testing difficulties.

And most recently, the ambitious Constellation Program, an initiative with the directive of returning U.S. astronauts to the Moon, and then Mars and points beyond – was cancelled by the Obama Administration.

The cancellation and subsequent redirecting of  NASA to empower commercial companies – radically changed the space agency’s goals. Moreover, seven years worth of development and $9 billion had already been spent on Constellation at the time of the program’s close.

Congress salvaged some of the Constellation Program in the form of the Orion Multipurpose Crew Vehicle and the Space Launch System. But just as with Constellation, they are failing to give NASA the funding necessary to complete its tasks. Cost overruns are a part of aerospace, and NASA appears to be taking the audit in stride. But with its congenital under-funding of NASA, it’s hard to believe Congress is really serious about America’s civilian space activities.

Since the termination of the Apollo program in 1972, NASA has limped along with less than 1 percent of the federal budget, and it is usually one of the first targets when Congress wants to reduce spending. Yet in addition to the manned space program, the organization has many other programs across which it is required to spend its diminishing pennies.

If NASA is not to be properly funded, it cannot accomplish its goals—or worst the agency will try to fulfill its obligations with adequate resources. The consequences of these actions were visible during the so-called “faster-better-cheaper” era at NASA. Several spacecraft were lost during this time.

While some would argue that the contractors and agency itself has a tendency to overfund its projects, the recent relationship that NASA has fostered with the commercial space firm SpaceX highlights that space – doesn’t come cheap. SpaceX CEO and founder Elon Musk has made repeated statements and even testified that his company can handle the U.S. Air Force’s annual launch requirements and then some. With the agreements that the company currently has on the books, that comes to about 17-18 launches per year. Which is almost double what the company has been able to conduct in the past half-decade. The Altair lunar lander, one of the canceled projects of the now-defunct Constellation program. Image Credit: NASA

Evidently President Obama’s goal is to transition from a government-run space program to a commercial one (a strange goal for a Democrat, and impractical for a large-scale program), and yet the private companies competing for the Commercial Crew Program contract will be taxpayer-funded—so the private space program is not really private at all. In fact the use of the word “Commercial” is highly inaccurate as the only customer that, at present, uses the Dragon spacecraft – is NASA.

The same is true for Orbital Sciences Corporation’s Cygnus spacecraft which is one of the two companies delivering cargo to the ISS under the Commercial Resupply Services contract.

While Bigelow Aerospace has expressed interest in Boeing’s CST-100 for its proposed inflatable habitats, the fact remains that rather than changing the paradigm, these efforts primary positive aspect are that they are allowing different aerospace companies a chance to compete with established players such as Boeing and Lockheed-Martin. If the President and Congress really want U.S.  manned launches to the International Space Station, an asteroid capture mission, and a manned mission to Mars, then they’re going to have to be willing to either make the investment, or to work with organizations such as the European Space Agency, Canadian Space Agency and Japanese Aerospace Exploration Agency so as to help offset the cost.

Russia is increasingly proving to be an unstable partner for such an effort and China’s activities toward gaining technological insight through less-than-honest means – make them an odd fit for such a collaborative effort. The simple fact is that while the world needs a crewed deep space program with an eye set on development and colonization – the U.S. cannot afford to fund it entirely on its own.

NASA still needs to be ever-vigilant in terms of cost-overruns. Congress needs to recognize the organization that will develop the capabilities allowing us to not only protect our home world – and to cease being a single-planet species altogether – is NASA. With the shuttle program a thing of the past, and with the next spacecraft and booster system on uncertain financial ground – NASA must be given clear direction – and the funding to accomplish it. Photo Credit: Michael Seeley / SpaceFlight Insider

The views expressed in this commentary are solely those of the author and do not, necessarily reflect those of SpaceFlight Insider.

This commentary was edited at 7:08 p.m. EDT on July 27 to include two additional images.

This commentary was edited at 11:13 a.m. EDT to reflect accurate percentage of U.S. budget allocated to NASA during Apollo Program.

Re organize NASA?
Hire new blood
Change reps to Congress.
More can be done
Have more colleges onboard for projects.

Fund it like it should be. Tooooo many good things come from the research to stop now. Change Congress to ones who have brains and will do what is right!!

More importantly than the craft lost, there were human lives lost. Also, is there anything wrong with crewed missions? Manned has a negative context to it.

Shutting down NASA seems a bit drastic. Lots of people would lose their jobs if that were to happen. It seems that any “call to arms” to the space enthusiast community to write their congressperson to increase funding to NASA seems to fall on deaf ears.

There has to be a way to change this.

It seems strange that NASA has a count down to the first launch of the SLS, but now we hear they don’t have money to Orion is too heavy.

As much as I hate to say it, the SLS really seems like a rocket with no clear mission. Shutting down NASA for shortfalls caused by congress and the President is not the way to go.

Hi Tom,
Why does “manned” have a “negative context” – I mean, outside of those who are overly concerned with being Politically Correct?”

Here is the definition of the word man:

man
/man/
a human being of either sex; a person.

NASA never had a budget of close to 10% of overall government budget. At its peak, NASA budget was maximum of about 4%.

And all anyone is really asking in the meantime is 1% of the overall budget. That can easily be scraped from the Government waste we’re spending on corrupt governments overseas and failing programs here at home.

Just an FYI when thinking Congress can’t fund NASA properly. In the last few weeks, Congress has Allocated funding from no where for extra Border Control of $3B and just today a full $17B to speed up the VA appointment backlog (well needed). That alone would be virtually NASA’s entire yearly budget. I think the issue is what they value and what they will really do.

NASA has been slow walking this program from the get go, looking for any excuse to delay it or cancel it. They spend all their resources on Environmental and diversity programs which have nothing to do with space flight. NASA has lost their direction and veered off course by order of our current administration.

Consider . . . if a President, say one at the height of his post-election popularity with political capital aplenty and a deeply held but unstated belief that NASA funding could be better used for social programs, decided to put an end to NASA, how would he do it? Would it be in a full frontal assault against what is still the most popular federal agency thanks to the golden age of space exploration and American heroes like Shepard, Glenn, Armstrong, or . . . would he choose “death by a thousand cuts” quietly trivializing, underfunding and shifting funding to the “private” sector; creating a “fool’s errand” ARM mission which has little support in the academic community or amongst the general public; refusing a return to the moon with the dismissive rationale that “we’ve been there” though many in the space community and general public support it, other nations are making plans for lunar missions, and it would act as a stepping stone to Mars; alienating, and damaging the trust of, our much needed European partners by inexplicably backing out of Exomars leaving them “in the lurch”; appointing NASA administrators who intentionally slow walk the program, for the first time ever have to be threatened with subpeonas from Congress to explain their recalcitrance, and savagely attack it as soon as they leave NASA. It gives one pause for thought.

I say layoff all the civil servants at Kennedy who have nothing to do and have had nothing to do since the end of Shuttle. NASA laid off thousands of highly trained contractors. But Currently these civil servants have numerous meetings on environmental and diversity issues. There needs to be a congressional investigation to find out exactly what they are doing. I realize this is a federal issue, but what is Gov. Scott doing about this, it’s in his state, and affects his economy.