Notes on the Run: Where the wild things are 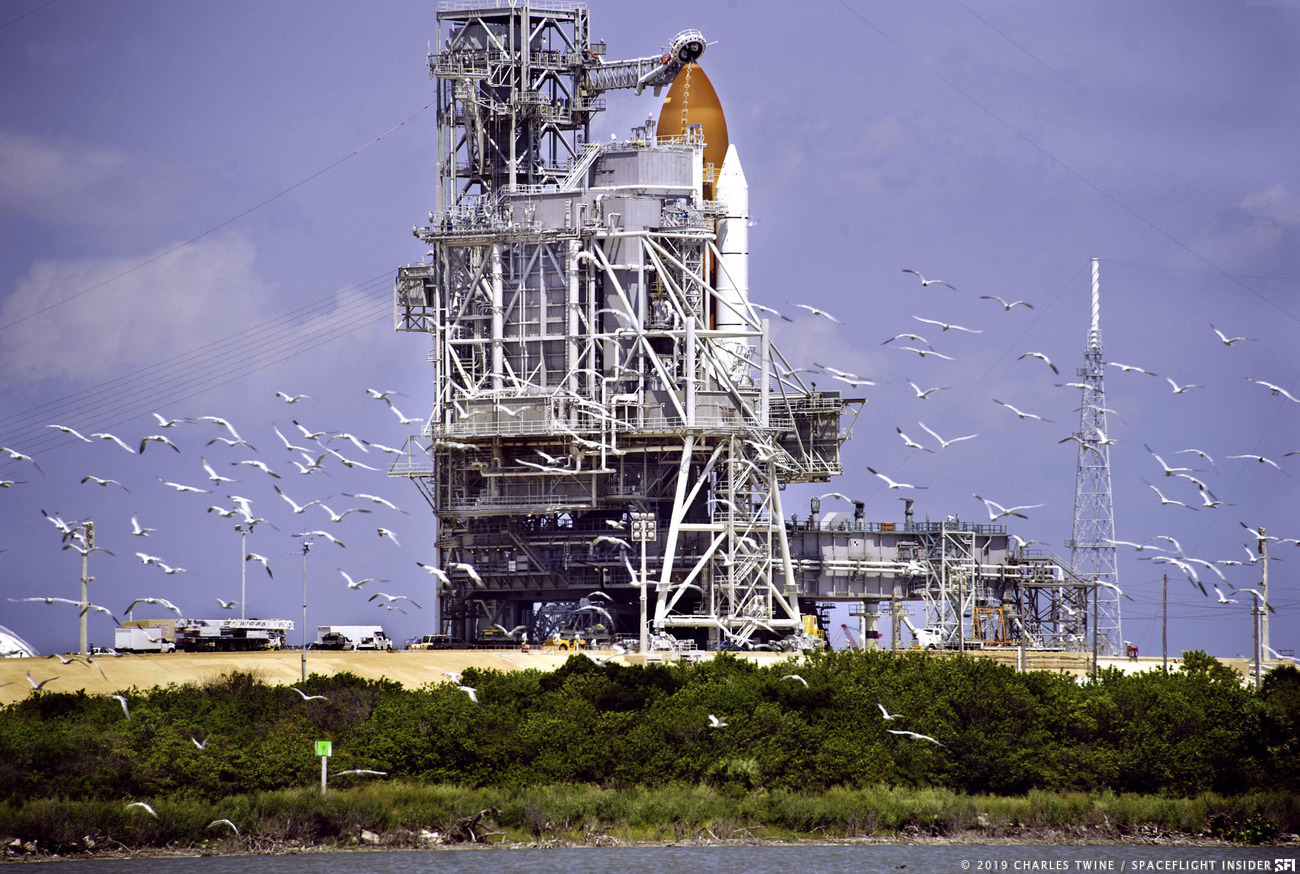 The locations where rockets are tested at or lift off from are usually in the middle of nowhere. Within these swamps and deserts live a wide assortment of creatures that you have to contend with if you’re going to be in the space business.

One of my first personal experiences with “space critters” was relatively mild. When I interned at NASA’s Kennedy Space Center in 2007, I came to work at 9 a.m. – on one particular day someone else checked in a little earlier. 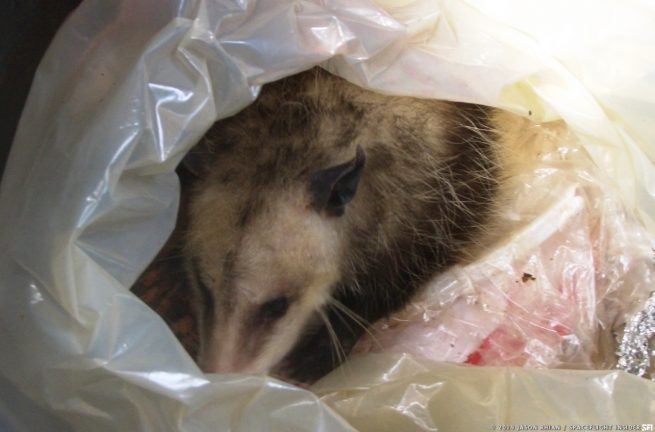 “Pamela Possum” rests inside a trash can outside of the Kennedy Space Center Press Site in the summer of 2007. Photo Credit: Jason Rhian / SpaceFlight Insider

Dubbed “Pamela Possum” one of the marsupials had curled into a trash can by the NBC building and given birth. Wildlife management came in and gently relocated her and her brood to a more appropriate location where she could raise her family.

In terms of my encounters with the animals located within the 219 square miles (570 km2) that the Center rests on – things wouldn’t always be so warm and fuzzy.

During the TCDT (Terminal Countdown Demonstration Tests) for the crew of STS-118, the astronauts were going over how to drive the M113 vehicle that would whisk them away from a dangerous situation at either LC-39A or B.

We had been there a long time (it felt like hours) when nature, of a different sort, called out to me.

I asked my NASA nursemaid, Manny Virata, if it’d be okay for me to sneak into the bushes for a minute. KSC is covered in pine trees, shrubs and palmettos and he told me to go ahead.

Making sure I wasn’t visible I crept behind some palmettos. A few moments later two adorable piglets emerged from the brush.

As a Florida native, I knew what was following them and proceeded to retreat as quickly as I could. Sure enough, a deep grunt let me know that mom was following her kids. I counted myself fortunate as I managed to get away without a scratch. If memory serves, Manny had a laugh at my expense when I relayed what had happened.

What goes around comes around. Preparing for Endeavour (the orbiter that was used on STS-118) to return meant frequent trips to and from the Shuttle Landing Facility, something Manny opted to forego, choosing to stay at the SLF. 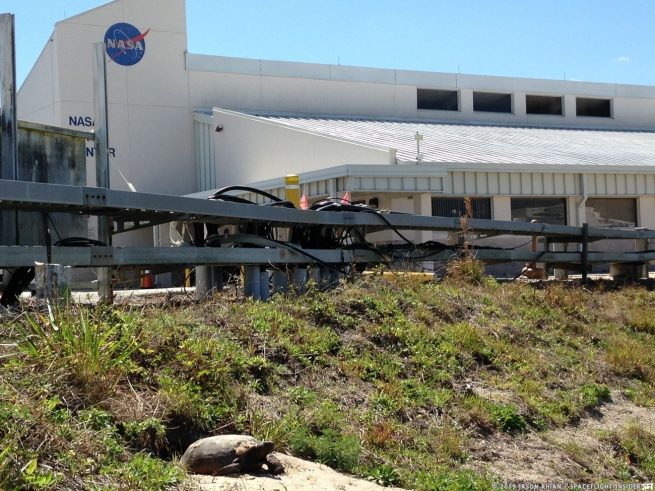 Manny had brought lettuce to feed the gopher tortoises (a species that has been deemed “threatened” in Florida). At first, Manny had only one of the slow-moving vegetarians to feed. When I came back from another run, he had a couple more, and on my next run there were even more.

I don’t know how the scenario ended, however, I always imagined that the public affairs officer’s position had been overrun and he was forced to pound sand out of there as fast as he could all the while being (slowly) chased by the hissing armored reptiles.

For a time (I’m not sure if it still lives there) one of the tortoises resided in front of the press site and would occasionally wander around.

Speaking of reptiles, I don’t recall if this next event took place when I was interning with NASA or during my time volunteering with the space agency. All things considered, I think Manny got off easy.

A photographer had lost his cell phone when he was setting up remote cameras prior to a shuttle launch. I was given the task of driving to the various spots where the phone could be and, using a NASA-issued phone, call his number in an effort to hear the telltale ring. There was no joy at the first site (we would eventually find the phone at our third stop) so we moved on.

Thinking that the phone might have lost power, I searched for it near one of the tiny creeks that crisscross the Merritt Island National Wildlife Refuge where Kennedy Space Center is located. It wasn’t. However an alligator, measuring about six feet in length – was (my friends swear that the gator increases in size every time I retell this story).

I did an immediate about face and pointed the photographer in the direction of the SUV. “Did you find it?” He asked. “No, but if it’s there you’re going to have to buy a new one.”

No harm, no foul. However, this was something that wouldn’t always be the case. After the umpteenth scrub of another (uncrewed) mission our team headed back to wherever they were staying. It was night and we were all tired. One of our team had a deer jump out in front of him. He wasn’t able to stop in time, unfortunately striking and killing the deer.

While driving back to his hotel after a launch attempt had scrubbed, a photographer’s car was struck by a deer causing severe damage to his vehicle. Photo Credit: Jared Haworth / We Report Space

While the photographer was stressed to the max (rightfully so) about his car, the people who came to help didn’t appear to have picked up on the strain the situation had placed him under. Instead? They offered suggestions as to how the venison from his “kill” could be collected. Under the circumstances, I doubt I would have been able to maintain my composure – let alone my sense of humor.

In a post he made on social media the following day, the photographer summed up his frustration at the never-ending string of delays when he said: “I’m out of clothes and I’m out of cars – this rocket needs to launch.” 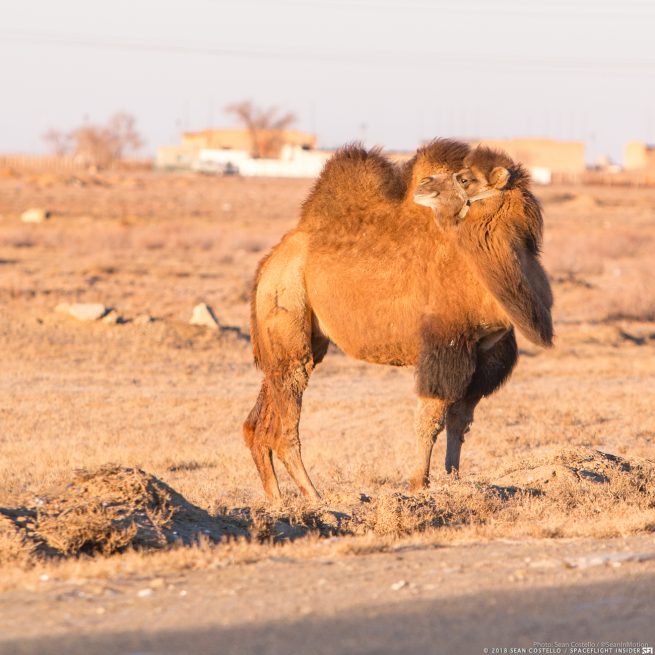 NASA, and its family of contractors, have also had their share of animal encounters. One of my favorite stories comes from the remote deserts of Utah. Northrop Grumman’s Charlie Precourt was driving us out to the test site for the five-segment solid rocket booster that is being developed for use on NASA’s Space Launch System. He began telling us about the most dangerous species of animal known to man – free range cows.

“We were sitting in the control room and the clock was ticking. All of a sudden, we saw this cow, they’re roaming all around out here. It was up on this hill above the test site.” Precourt said with a slight smile. “We were all trying to figure out what we were going to do next and then things got worse.”

I wondered, how things could get worse considering that the company was about to make one very large hamburger.

“The cow fell down the hill near the test stand. The…I mean the entire test team fell completely silent. I don’t think an abort has ever been called on account of an injured cow, but that was what it was looking at.”

I asked him how the situation played out.

“The poor thing got up, kinda looked around and wandered off. We tested on time and, besides the cow incident it was a rather uneventful test.”

“Notes on the Run” is meant as a retelling of some of my experiences chasing rockets over the course of the past 14-or-so years. It’s also meant as a guide for those considering to do the same. Hang on to your dreams, keep your nose to the grindstone and watch where you’re stepping. 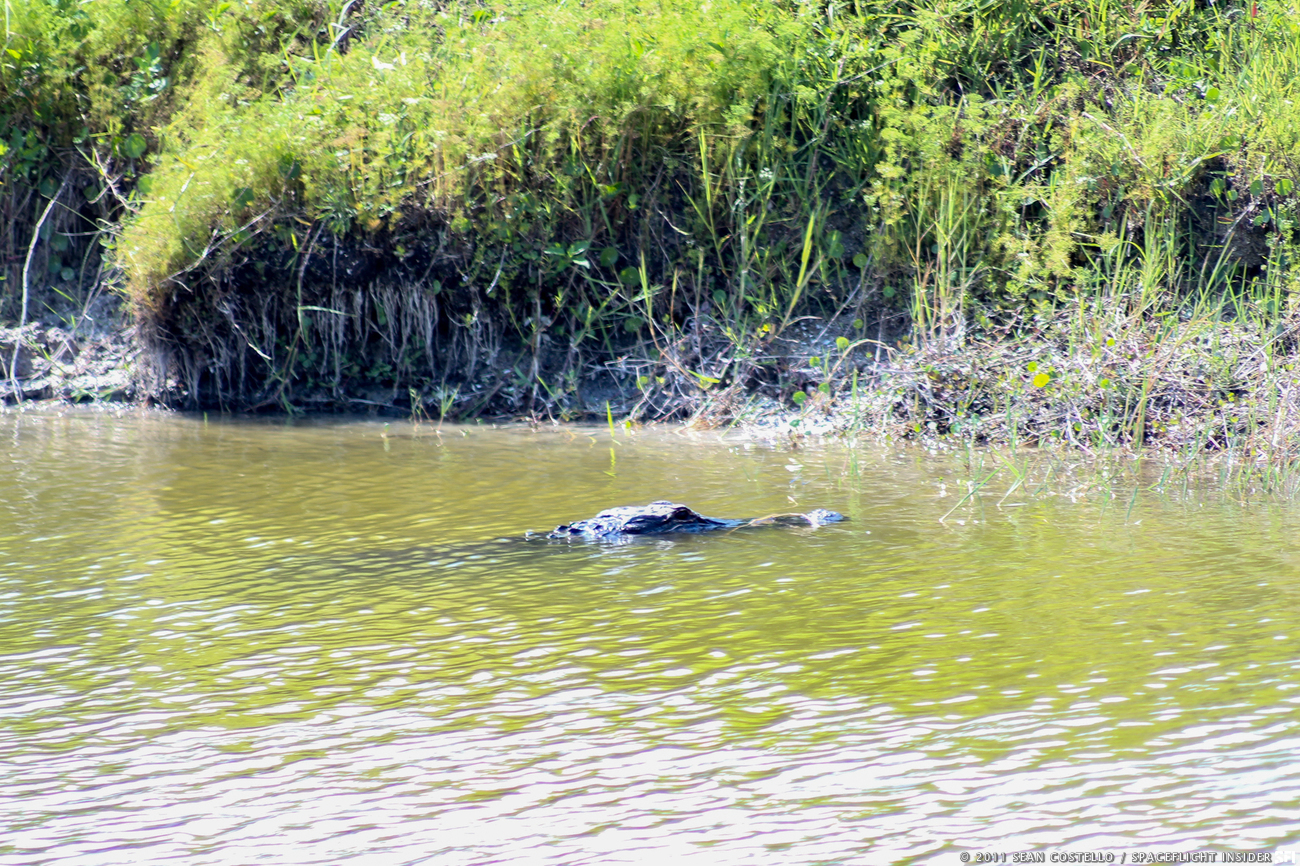 When you are walking around Cape Canaveral or Kennedy Space Center you should make sure you watch where you step. Photo Credit: Sean Costello / SpaceFlight Insider