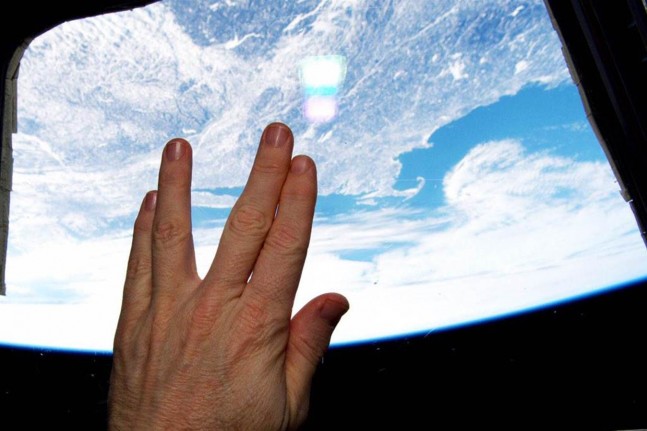 NASA is mourning the passing of Leonard Nimoy, who played the alien science officer Mr. Spock on the 1960s television series Star Trek as well as in eight motion pictures. Nimoy was hospitalized for chest pains on Feb. 25 and died two days later on Feb. 27. The cause of death was attributed to chronic obstructive pulmonary disease (COPD) — Nimoy was 83.

Nimoy—and the television series for which he was made famous—left an indelible legacy on American culture, as well as the world. Nimoy’s passing was mourned not only by legions of loyal fans, but by scientists, astronauts, and even the President of the United States.

“Leonard Nimoy was an inspiration to multiple generations of engineers, scientists, astronauts, and other space explorers. As Mr. Spock, he made science and technology important to the story, while never failing to demonstrate, that it is the people around us who matter most. NASA was fortunate to have him as a friend and a colleague. He was much more than the Science Officer for the U.S.S. Enterprise. Leonard was a talented actor, director, philanthropist, and a gracious man dedicated to art in many forms. Our thoughts and prayers are with his family, friends, and the legions of Star Trek fans around the world,” said NASA Administrator Charlie Bolden in a statement released by the space agency. President Obama said, “Long before being nerdy was cool, there was Leonard Nimoy. Leonard was a lifelong lover of the arts and humanities; a supporter of the sciences; and generous with his talent and his time. And of course, Leonard was Spock. Cool, logical, big-eared and level-headed, the center of Star Trek’s optimistic, inclusive vision of humanity’s future. I loved Spock. In 2007, I had the chance to meet Leonard in person. It was only logical to greet him with the Vulcan salute, the universal sign for ‘Live long and prosper.’ And after 83 years on this planet — and on his visits to many others — it’s clear Leonard Nimoy did just that. Michelle and I join his family, friends, and countless fans who miss him so dearly today.”

Astronaut Terry Virts, currently serving aboard the International Space Station as part of the Expedition 42 crew, photographed his own hand performing the Vulcan salute with Nimoy’s hometown of Boston visible far below. These are just a small sample of expressions of loss of an actor, poet and photographer.

Nimoy leaves behind an astonishing legacy, especially considering the fact that the TV series that started his career only stayed on the air for three years due to poor ratings. However, the optimistic tone that the show relayed, struck a cord with fans across the globe. The show that many considered a “failure” — would go on to spawn five spinoff TV series and twelve motion pictures.

Star Trek the original series premiered on Sept. 8, 1966—with Nimoy’s Mr. Spock as the first character appearing onscreen—and was the brainchild of writer/producer Gene Roddenberry, a former policeman and combat pilot in the United States Air Force.

A lifelong science fiction fan, Roddenberry wanted to bring real science fiction to television, as opposed to the childish fare that had permeated the screen for decades.

The starship Enterprise was designed to be as realistic and functional as possible. The many props and gadgets were created with a serious eye toward where science and technology was headed. Roddenberry consulted with RAND Corporation physicist Harvey Lynn throughout the early production of the series.

In many ways, Star Trek’s future still feels very far away, but in many ways it has already come true. The innovative sickbay beds with their vital function monitors are a present-day reality in hospitals. Today’s cellphones resemble Captain Kirk’s communicator and Mr. Spock’s tricorder.

Theoretical physicist Miguel Alcubierre has developed an idea for a warp drive remarkably similar to that of the the Constitution-class Enterprise which is currently being studied by Harold “Sonny” White and Dr. Richard Juday at NASA’s Johnson Space Center.

Even during Star Trek’s original troubled run, it proved tremendously inspirational to a significant audience.

“Quite often,” Roddenberry said, “we hear individuals who are heavily involved in our nation’s space programs express the feeling that Star Trek is helping prepare the public (and members of Congress, whom they depend upon for their budgets) for an eventual Mars shot, and beyond. This is gratifying to us. We hope we are helping to form the concept that present space attempts are not wasted money—or that future interplanetary space travel is not just ‘wild fiction’. It will be as important to mankind tomorrow as the discovery of America was in its day.” The enormous influence of Star Trek can be seen in the fact that NASA’s first space shuttle was named after the fictional starship Enterprise. Photo Credit: NASA

According to author James A. Lely, “[Nimoy…] has been asked to speak to groups of scientists about engineering features of a starship, or to address NASA about problems of space communication.”

It’s virtually impossible to separate Star Trek from Leonard Nimoy. Although William Shatner is the star of the show, and his character, Captain James T. Kirk is the hero and the main character, Spock is easily the most recognizable character on the show; in fact, it could be argued that he might be the most recognizable character in television history. Everyone, even those who have never watched an episode of Star Trek, will likely identify Mr. Spock on sight. Star Trek will always and forever be “that show with the guy with the pointed ears.”

Among his many other qualities, Spock was one of the first extraterrestrials in the mass media who was depicted as friendly, rather than a rampaging invader. Friendly aliens had appeared in The Twilight Zone and The Outer Limits, and occasionally Buck Rogers would befriend an alien in his newspaper comic strip, but Mr. Spock was the first friendly alien to appear as a regular character in a serious piece of science fiction that reached the mainstream public.

The mere presence of Spock aboard the Enterprise showed passively, and in every episode, that we need not fear extraterrestrials—or even human beings who might be different. It is no coincidence that Spock’s pointed ears and upswept eyebrows look Satanic; his appearance was designed to evoke a sense of the foreign, the frightening, to contrast the fact that he is a trusted ally and friend, making the point that you can’t judge a person by their appearance.

But most of all, Nimoy believed in the character he played. Almost every science fiction series since Star Trek has tried to have its own Spock. Logan‘s Run had Rem. Buck Rogers had Hawk. Star Trek: The Next Generation had Data. Stargate had Teal’c. And of course there have been innumerable Star Trek spoofs and fan-produced films.

The one thing all these shows have demonstrated is that perhaps no one could have played Spock except Leonard Nimoy. Nimoy gave Spock a depth and realism that no one else, either playing Spock or a Spockish character, has managed to do. Nimoy played him as real.

Two days before Nimoy’s death, his longtime friend and co-star William Shatner said, “Nothing would be the same about Spock if Leonard Nimoy hadn’t played him. The attempt to restrain the emotions, to not show what’s behind the eyes, to suffer silently but suffer—in Spock’s case to be in two worlds, to be torn. That resonated in a lot of people.”

Star Trek was canceled in early 1969, with the final episode being aired on June 3. Less than two months later, on July 20, Neil Armstrong and Buzz Aldrin walked on the surface of the Moon. It’s probably no coincidence that Star Trek reruns began to swell in the ratings—until they surpassed by far the ratings of the show’s original run. If Star Trek had a small part in putting a man on the Moon, that historic event had its part in resurrecting Star Trek, and indeed Star Trek returned with its entire original cast in Star Trek: The Motion Picture in 1979—and it has not left us since that time.

In spirit, then, Leonard Nimoy will always be with us. In Star Trek II: The Wrath of Khan, after Spock had apparently given his life, Dr. McCoy (DeForest Kelley) said, “He’s really not dead…as long as we remember him.”

Nimoy’s legacy is still flying. His character lives on in new actors in the reboot films and fan series like, Star Trek Continues, and his spirit soars on board the International Space Station. He’ll be remembered on the crewed Dragon and CST-100 missions which are slated to begin within the next three years. One can only hope that, maybe, the attention paid to Nimoy’s passing might inspire Congress to properly fund NASA and get the Orion capsule flying with crew on board as soon as possible, so that, soon, the United States can once again will boldly go where no one has gone before.

Nimoy’s final tweet contained a few touching words of wisdom for us all:

A life is like a garden. Perfect moments can be had, but not preserved, except in memory. LLAP