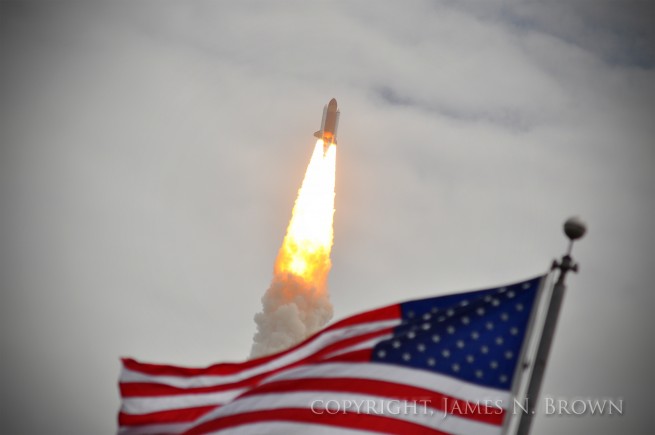 The United States' space program has been on a slow decline since the end of the Apollo Program. After this high point, NASA was only able to send crews into low-Earth-orbit. Now, the space agency is not able to accomplish even that. Photo Credit: James N. Brown / SpaceFlight Insider

Remember when you were sixteen and getting ready to sit in the driver’s seat of a car for the first time? Until that moment you were at the mercy of your parents. “Sure you can go to the mall with your friends, but make sure you wash the dishes first.” “Of course I can pick you up from baseball practice, but I’ll be an hour late because of a last minute meeting.” You almost always got where you needed to be, but never on your own terms or time.

Finally, sixteen and sitting in the cockpit of the family station wagon, you were the master of your own destiny. Of course the reality would turn out to be far from as glamorous as you imagined. Growing up and owning your own car meant insurance bills, car payments, maintenance and being the one who all your friends or kids asked to drive places But the obligations are always worth it, not for a day would you go back to begging rides after feeling the wind in your hair.

Unless of course you were trying to get to the International Space Station. The U.S. is dependent on Russia for transportation of its astronauts to the International Space Station. The U/S/ currently lacks the ability to send crews to the station that it built. Photo Credit: NASA

Since the decision to phase out the space shuttle met a lethargic attempt to replace it, American astronauts have been hitching rides on Russian Soyuz, paying in cash for their seats. While the payment scheme is unusual in international partnerships (most agencies prefer to supply mission packages instead of monetary contributions for fear of runaway costs), the relationship carries an important political message as well: the United States is not a committed leader in space.

Of course anyone in the space community knows that America has many of the best minds in the game, and that NASA’s regression to begging for rides is in many ways a perceptive rather than substantial change in American commitment to space exploration. Yet perception is critical in halls of government, and anyone that has had to ask a friend for a ride knows there is a shift in the underlying power relationship that exists when your freedom of access is restricted. That weakened power dynamic comes at a time when American leadership is being questioned in more than just space, and reverberates in the wake of chilled relations with Russia in recent months. Our inability to take our own astronauts to space may not have dramatically interrupted access to low Earth orbit, but its demoralizing effects are felt much wider than Cape Canaveral.

Imagine how embarrassing it would be if a disagreement with Putin over Syria or Snowden resulted in the Russians refusing to host American astronauts just to flex some muscle. Politicians have done far more in response to much less.

Thankfully, on November 19 NASA announced it was another step closer to restoring the American political ego. A Request for Proposal (RFP) went out calling for companies to submit bids for the Commercial Crew Program (CCP), a typically American blend of business and government intended to get astronauts to space on crafts once again carrying the stars and stripes. The Commercial Crew Transportation Capability (CCtCap) is designed to foster job growth, build political will for continued investment in NASA, and make the United States the premier partner for all destinations up.

Our pride in the American space legacy is proof that the burdens associated with maintaining our own ride are well worth the cost. Any chance of building on that legacy and maintaining NASA’s presence as a leader among peers can only come through example. The CCtCap phase of the Commercial Crew Program is a good start in rectifying our failure to launch.