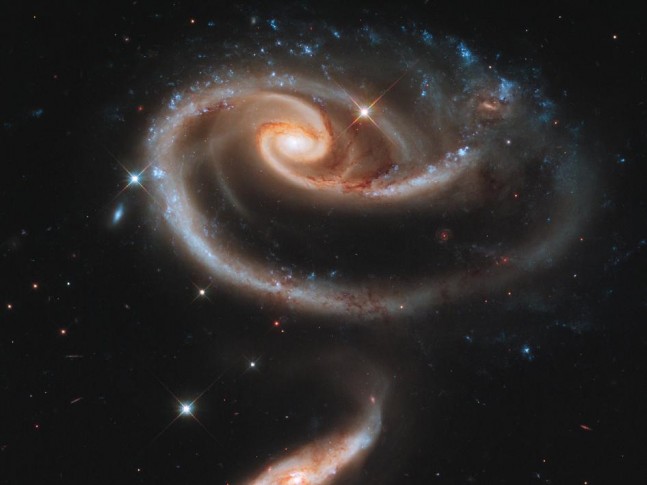 If alien life is prevalent throughout the Cosmos - then why haven't we heard from them yet? Photo Credit: NASA

You and your wife are on a two-hour trip late at night in separate cars, travelling through dense fog. You need to talk but you can’t see her. She’s out there somewhere. The only mode of communication with her is a CB with a hundred different channels and no idea which one she might be on. You both go through them one at a time but the odds of each of you landing on the same frequency at the right moment are long indeed…

That is just one of the many problems that SETI has had to deal with for over 50 years in their quest for contact with an extraterrestrial civilization. Science tells us that the same elements and processes that made us and our world are at work throughout the galaxy. The Kepler telescope is discovering new planets all the time Out of the roughly 200 billion stars in our galaxy there may be a billion earth type planets.

That’s potential for a lot of life out there.

But for a single exception the SETI telescopes have heard nothing.

That exception occurred at Ohio State University on August 15th 1977. Jerry Ehman was using the university’s radio telescope Big Ear to look for ET’s calling card. In going over the data he discovered a signal that stood out very distinctly from the background radio noise and looked exactly like what they expected an extraterrestrial signal might look like. Ehman was so excited he wrote WOW! in the margin next to the startling series of numbers and letters. Only problem was that after 72 seconds the signal never repeated itself….ever. And that by SETI’s definition still classifies it as an unknown to this day. Interestingly enough, years later we sent out a radio signal using the powerful Arecibo Telescope in Puerto Rico. And we only sent it once. No repeat. Now if any alien civilization were to someday pick it up and used the same criteria we use, they would probably come to a similar conclusion.

We probably don’t exist either.

In 1961 Frank Drake came up with an equation that attempts to calculate how many extraterrestrial civilizations might be out there. The equation uses a set of seven definitions from the rate of star formation to the length of time a civilization might last. The number he came up with was 10,000. Now of course that’s purely a guess, but If he’s right, why haven’t we seen or heard any evidence of them? There should be all kinds of chatter out there.

In the summer of 1950, Italian physicist Enrico Fermi was having lunch with Edward Teller of all people. The discussion turned to the possible existence of aliens and Fermi came up with what has long been known as “The Fermi Paradox.”

Fermi ‘s basic premise was this. 1. The Milky Way is probably teeming with planetary candidates that could harbor intelligent life. 2.Most of the 200 billion stars out there are considerably older than our sun. 3.You’d have to assume there are many intelligent civilizations far more advanced than ours. Maybe millions of years older or more. 4.Even just one of those civilizations would have had more than ample time to colonize most of our galaxy. 5. We certainly would have seen evidence of their existence by now. 6. So, where are they?

What about UFO’s? Might they be an answer to Fermi’s Paradox? Maybe, but probably not. So many of the scientists who favor the existence of extraterrestrials are just not buying into the UFO phenomenon. And that should tell you something. As appealing as it sounds to many, after many thousands of reports over decades there is still not a single credible piece of evidence of their existence. And for the conspiracy buffs, I highly doubt that our government would be spending billions of dollars to look for microbes on Mars if they had already had made contact with grays from Zeta Reticuli.

Physicist Paul Davies speculates there made be some great filters at work here such as life ending cosmic collisions or self-destructing civilizations limiting the amount of time that they’re around. This could account for as he puts it, “the eerie silence”. I think the first is improbable. Any advanced civilization would certainly have the technology to obliterate or alter the course of some rogue asteroid or comet heading their way. The second is an interesting concept though. How long do civilizations hang around able to advertise their presence? He uses the example of a town of one hundred people. If over a twenty four hour period each homeowner were to turn their lights on for only ten seconds randomly, what would be the odds that two houses would have their lights on at the same time?. Not good. However if you increase the amount of homes or lengthen the time of illumination the chances go up dramatically.

Or maybe it is just as simple as the warning Stephen Hawking has given us. Don’t go looking for something you may not want to find. Maybe there are tons of advanced civilizations out there, but nobody wants to advertise their presence for fear of someone like Darth Vader and the evil empire gobbling them up and spitting them out. Or maybe extraterrestrial intelligence is so advanced we wouldn’t even know it if we saw or heard it. Some scientists theorize advanced alien intelligence would probably be indistinguishable to us from magic.

So where does that leave us? There could always be that possibility that we are the only game in town in the vast wilderness of our galaxy, but I don’t think so. I think that there are a number of intelligent civilizations out there as we speak. Maybe not as many as we originally thought, but they are out there. We could have already detected their presence (the wow signal) or that moment may be just around the corner. There could also be other reasons for the silence. Reasons we have yet to grasp. The great Carl Sagan once said, “Absence of evidence is not evidence of absence.”

If and when that moment arrives, the significance to mankind would be profound. God would still be with us but the result of contact would set our notions of us and our place in the cosmos on a new course. One that would lead to mind boggling scientific discoveries and a new sense of our own existence, not as separate nations and people warring with each other but as one global race and part of something much larger and incredibly more significant.

Nice summary article on the subject of SETI. Several of the arguments pro and con (for the existence of other intelligent beings) are nicely synthesized, but toward the end the author expresses a personal opinion, yet there is no name associated with the piece. That would be helpful information to put alongside the dateline.