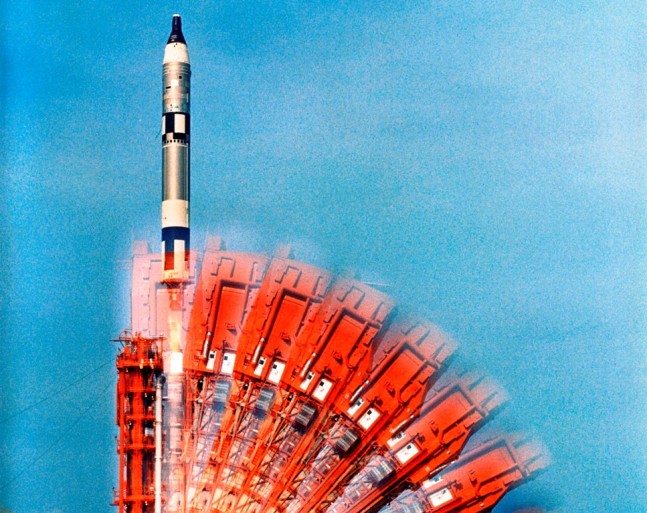 ST. PETERSBURG, Fla — J.L. Pickering and John Bisney have been interested in the space program since the massive Saturn V booster was causing windows to tremble along Florida’s Space Coast decades ago. Pickering has been an avid professional collector of space photos – for nearly that same amount of time. The duo have partnered to produce Spaceshots & Snapshots of Projects Mercury & Gemini, a book containing 689 color pages from NASA’s first two manned space exploration efforts. Spaceshots & Snapshots of Projects Mercury & Gemini dedicates a chapter to each mission flown under Projects Mercury and Gemini and was produced to show images that are infrequently seen by the public. According to the book’s authors, this is something that the University of New Mexico Press had made an unusual request about.

“Instead of them asking for less images in the book – they wanted us to include more,” Bisney said. “It was difficult to trim back the amount of photos we used in the book due to all the incredible shots that we had available to us.”

With a chapter dedicated to each of the six Mercury flights and ten Gemini missions, Pickering and Bisney had a wealth of imagery to wade through to select for this first book. Each mission is provided with a full chapter, starting with what the authors thought was the most iconic image from that particular flight.

After that first image, however, the duo chose photos from these two distinct programs that are rarely seen outside of those within the industry.

“J.L. and I noticed that whenever we would open a book about the space program, we would see the same few images over and over again,” Bisney told SpaceFlight Insider. “It’s understandable that some authors want to show the most famous images from, take for example Apollo 8, they say, ‘Well, I can’t leave that one out’, that sort of thing.”

Bisney noted that using the same photos over and over again leads to what he referred to as “image fatigue” – where the reader’s eyes gloss over familiar shots in the search for something fresh.

Bisney and Pickering have a second book, Moonshots and Snapshots of Project Apollo: A Rare Photographic History, primed and ready for a September release. This new book will contain 272 pages and some 1,017 color photos from the Apollo era.

For this new book, there will be about 60 more pages than in the first volume and will cover not just the launches that comprised the lunar portion of the Apollo Program, but Skylab and the Apollo Soyuz Test Project (ASTP) as well.

The images within Spaceshots and Snapshots of Projects Mercury and Gemini come from an array of public and private sources including NASA archives, retired NASA officials, auctions, and elsewhere. Pickering has endeavored for some time to have one of the most comprehensive collections of space flight images.

“Rarely is there a month that goes by where I don’t acquire some images from the early days of spaceflight,” Pickering said. “We really tapped into these retirees and NASA folks…”

The duo noted that the books that they are currently working on had got its start as a single tome. “Originally, this was supposed to be one large book, so we were talking about a book that would have stretched some 500 pages,” Bisney noted. “With how expensive that would have been, we decided to break it down to two volumes.”

As mentioned, Pickering stated that they had concerns the publisher would request that some of the stunning images would be removed. Rather, the New Mexico University Press wanted everything that they had.

“The greatest challenge we had was, when there really was one of those historic milestone moments is finding an alternate view, one that the world had not seen before,” Bisney said.

While the Apollo follow-up book is just a few months away from its release, Bisney and Pickering are unsure if they will produce volumes covering the Space Shuttle Program.

Released in June of this year (2015), Spaceshots and Snapshots of Projects Mercury and Gemini can be purchased from bookstores or online for around $45.00.