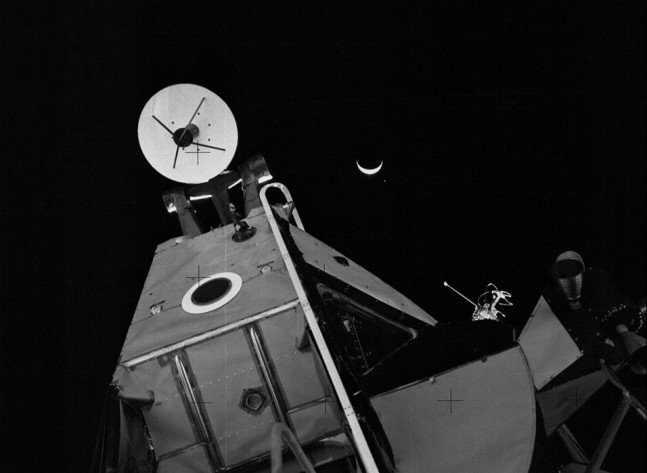 Apollo astronaut Edgar Mitchell touched down on the lunar surface 40 years ago - but his mission of discovery continues. Photo Credit: NASA

Former Apollo astronaut Edgar Mitchell, veteran of the historic Apollo 14 mission to the Moon, is working to impress upon his fellow human beings the importance of developing a sustainable civilization. Given the instant gratification, tax-and-spend culture we live in – this is, perhaps, a tall order.

Mitchell explained during a recent interview that every measure of our civilization is on an exponential growth curve, and it doesn’t take a mathematical genius to realize that such a curve in a finite space such as our planet – is not sustainable. Mitchell flew to the Moon as the Lunar Module pilot on Apollo 14 in 1971. Photo Credit: NASA

“If you take a look at our population growth, at the end of the nineteenth century, there were about one point six billion people, and at the beginning of the twenty-first century, one hundred years later, we’re at seven billion people, and by the middle of the century, we’ll be at nine billion people. And our standard of living, which means taking resources off of the planet, is continuing to increase with the population, and as a result, it doesn’t take a lot of looking at the numbers to see that that’s not sustainable. And we seem to be continuing to do exactly that, to go ahead and multiply our population, consume nonrenewable resources like forests,” Mitchell said.

Although Dr. Mitchell sees an unfortunate and continuing trend in our disregard for our limited resources, he does see an increase in public awareness.

“I think the idea is starting to make headway.  Now, are most of the people really concerned with sustainability? No. They’re concerned with making a living today, and what they want to do. However, the message is out there. A lot more people than myself are hammering on it. And so if we keep doing it, we will make an impact,” he relayed.

Unlike others within the space community Dr. Mitchell doesn’t claim to have solved all the world’s problems.

“It’s going to take some real ingenuity to find a proper lifestyle and proper way for people . . . to live and still maintain a sustainable society. I don’t have all the answers. We’re going to have to discover the answers, and at the moment those answers are simply not obvious. But they’re not going to be solved unless we as a civilization become attuned to it and are willing to solve it, and quit thinking only of what we can do for ourselves, to create more of what we want, instead of serving the greater good.”

However, he doesn’t dismiss the possibility that space exploration could play a role as some as have done. Mitchell is deeply concerned with what our species’ explosive population growth and never-ending need for limited resources will mean for the future of our world. Photo Credit: NASA

“It certainly opens up some possibilities of using resources from off-planet, of in due course moving people to another venue.  That’s all possible. Those are . . . I won’t say ‘pie in the sky’ at this point, but they’re certainly not immediately available solutions.”

More immediate solutions like solar power and wind, are “all important parts of it,” according to Dr. Mitchell.

“I don’t think they’re the final answer, but they’re very important parts of it.  We can use the Sun’s energy for some of our energy problems or to power things on Earth.  Yes, that’s important,” Mitchell said.

Forty years after his transcendent experience aboard Apollo 14, his work to improve how the fragile blue world he witnessed from the icy shoals of space moves forward. Whereas some might have moved on to other projects and other things, Mitchell stays focused on making that world – a better place.

Certainly not everyone would agree with Dr. Mitchell.  Many people are consumed with their own lives and wonder why they should care about the concerns of the rest of the world when they have their own problems.  Dr. Mitchell’s message to them is as poignant – as it is simple:

“Obviously we would like people to be concerned enough to be wanting to contribute to it while we’re alive, while we’re all here, to help make this a better place. We’re participating in life, in civilization every day. If we can get people of mind and consciousness to focus on ‘what am I doing to serve the greater good?’, then we have a chance of solving the problem. Otherwise we don’t.” Mitchell’s time on the lunar surface provided him a unique perspective as to what needs to be done to preserve our home world. Photo Credit: Carleton Bailie / SpaceFlight Insider